From 14 July, a new exhibition from FAAM collection "Sports Festivals in Art 'Who Wins a Gold Medal!" starts in Asia Gallery.

In commemoration of 2016 Summer Olympics and Paralympics held in Rio de Janeiro、Brazil, FAAM introduces 17 works from its collection based on the theme "Sports." The artworks show various physical activities including sports, traditional games, and leisure activities in Asian countries. 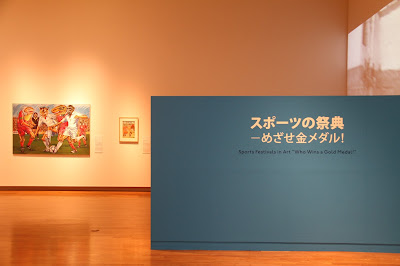 The theme color for this exhibition is blue. Fresh blue color brings refreshing breeze in the art gallery.

The term “sport” is derived from the Latin deportare, which means “to divert.” The word indicates leisure activities or games in which people become temporally free from the labors essential for maintaining one’s own subsistence.

This exhibition is divided into two sections: "competing bodies" and "playing bodies". The first half displays the works that use modern sports, physical practices, and competition as its theme, and the later half shows the other, more playful aspects of physical activities, such as games and dances. Together, the exhibition seeks to introduces a wide variety of physical activities found in Asia. 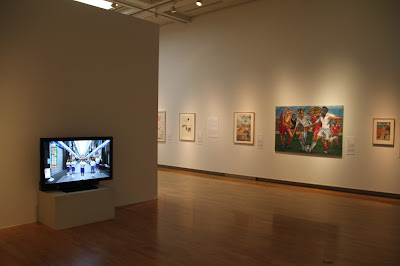 The video work on the left is "International Radio Exercise" by a Taiwanese artist, Chen Chingyao. The artwork was created in 2012 while he was staying in Fukuoka as a FAAM resident artist. In the video five people from different countries are trying to follow Japanese "Radio Exercise," which is unfamiliar to them. 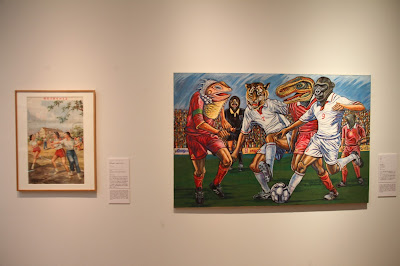 On the right is a painting "Competition" by a Myanmar artist, San Minn. The athletes competing with one another in soccer game are lion, gorilla, lizard, and dinosaur (?). According to the artist, he obtained the idea of the artwork by watching 2002 FIFA World Cup in South Korea and Japan on TV. Does the work try to say that the world of sports is also dominated by the law of the jungle?? 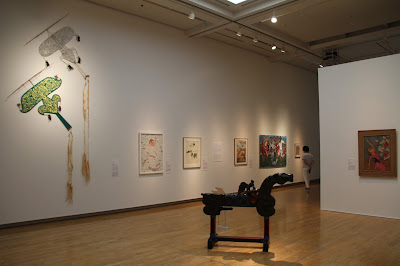 This part of the exhibition introduces a print work that depicts Chinese children playing table tennis, wall painting that depicts village festival of the Warli, an indigenous tribe in India, games for the Indonesian children, and other works that shows various types of leisure scenes in Asia. 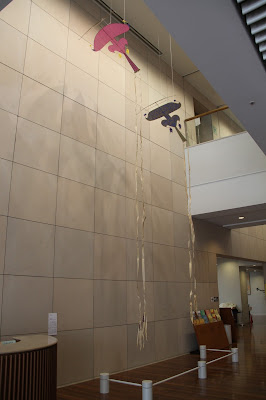 In the atrium next to the information desk on the 7th floor, you can find "Khmer Musical Kite (Khleang Ek)" by a Cambodian artist, Soeung Vannara that were created in 2002 in Fukuoka while the artist participated in the FAAM residency program. A bow-shaped bamboo part on the head of the kite makes noise when it flies. In Cambodia, people in an ancient time used this type of kite to threatening the enemy.

After the long rainy season, we can finally go outside and play under the sunshine. But, once in a while it is also nice to visit the museum where you can enjoy seeing the physical activities of various Asian countries and/or explore your imagination to create an idea for new sport in cool gallery space.