In an on-going collection exhibition, "Sports Festivals in Art 'Who Wins a Gold Medal!" introduces four new-nianhua posters (traditional prints made before the Chinese New Year). 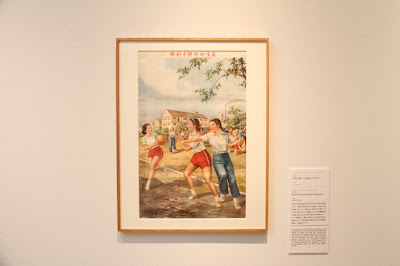 The above is a poster by Li Mubai et al. While it looks like a peaceful moment of young girls playing with a ball, the red text on top of the poster says, "練好身體増加生産 (Work on your body, improve national production)."

In China during the 1950s, sports were considered as a part of national policy to improve national security and production. Nianhua poster was used as a means to publicize the government's slogan.

The poster below is a commercial poster of young girls playing with their roller-skates by Jin Meisheng who was active in Shanghai in the 1930s. The poster was made 20 years prior to the above ball playing poster yet it succeeded to express modern and open atmosphere of cosmopolitan Shanghai. After the foundation of the People's Republic of China, Jin Meisheng shifted to make posters that directly expresses socialists ideologies. 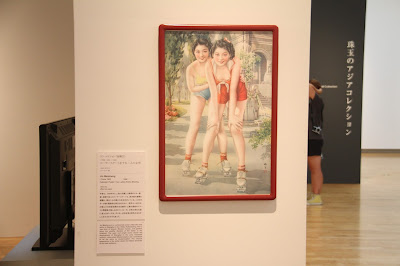 As the time and the political system changes, the motif and the theme of the painting also change greatly. The transition of nianhua posters in China shows us how the society and political system affects art through the printed images.